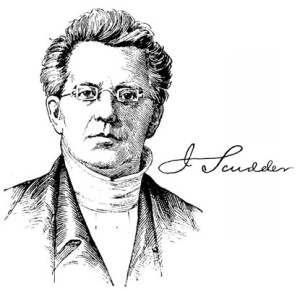 (September 3, 1793 – January 13, 1855), M.D., D.D., founded the first Western Medical Mission in Asia at Ceylon and later became the first American medical missionary in India. He began what amounted to more than 1,100 combined years of missionary service there by 42 members of four generations of the Scudder family of missionaries in India.

Scudder was born in Freehold, New Jersey, USA on September 3, 1793, the son of Joseph (a lawyer) and Maria Scudder. He graduated from Princeton University in 1811, and the New York College of Physicians and Surgeons in 1813. He practised successfully in New York City. 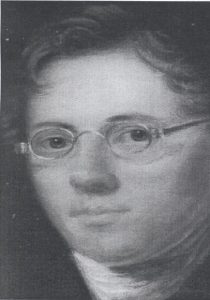 One day, while visiting a patient, he saw on a table the pamphlet Conversion of the World, or the Claims of the 600,000,000 and the Ability and Duty of the Churches Respecting Them. As he read it he became convinced that he was called to be a missionary in response to the command to go into all the world to preach the gospel and heal the sick. He then became thoroughly committed to serving God through medical missions of the American Board, later of the Dutch Reformed Board.[1]

He went to Ceylon in 1819 and founded the first Western Medical Mission in Asia at Panditeripo in Jaffna District as part of the American Ceylon Mission. He served there for nineteen years in the dual capacity of clergyman and physician. His most important service was the establishment of a large hospital, of which he was physician in chief. He was especially successful in the treatment of cholera andyellow fever. He also founded several native schools and churches. He later became the first American medical missionary in India, beginning more than 1,100 combined years of missionary service there by 42 members of 4 generations of the Scudders in India.[2]

In 1836 John Scudder and Rev. Winslow started a mission at Madras with the purpose of establishing a printing press to issue the Scriptures and tracts in the Tamil language. John Scudder established his residence at Chintadrepettah (Chintadripet). He was in the United States in 1842-1846 and returned to India in 1847 where he spent two years in Madura giving medical aid to the Mission at the special request of the Board though not appointed as a member of it. In 1849 Scudder returned to his mission in Madras, where he laboured till his death. He took a visit for the benefit of his health to Wynberg, Cape of Good Hope, Africa where he died on January 13, 1855. He and his wife Harriet had six surviving sons and two daughters who all became medical missionaries and worked in South India.

From Wikipedia, the free encyclopedia