English Yeomen in the 16th Century

Compiled by D. B. Scudder, 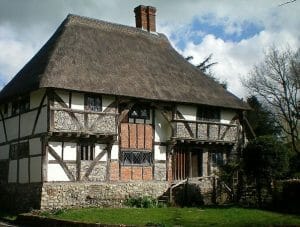 Example of An English Yeoman’s Home[2]

Note: [This article] was inspired by recurring questions about the significance of the term ‘yeoman’ that regularly pop up in Scudder family history. The information presented here is taken from G. M. Trevelyan, English Social History, (London: 1944).

In the 15th century, when Thomas of Salem and his brother, the Rev. Henry of Collingbourne Ducis, and their parents were born, the yeoman occupied an important position in the rural middle class. The term “yeoman” first appeared in the 4th century following the Black Death (bubonic plague). Yeomen were extolled in ballads as “independent” (i.e., not subservient), skilled in the use of the “English long bow” made from the yew from which the term is derived), and characterized as of “hearty good nature.’

The early ballads of Robin Hood identify Robin as a yeoman, although later versions describe him as a disguised member of the gentry. Yeomen carried the field at the battle of Agincourt in 1415, where Henry V won a major victory against the French, slaughtering countless French knights with their powerful bows and well-placed arrows.

Originally, a yeoman could have been a farmer, an armed retainer of an aristocrat, or most any other countryman of the “middling classes.” Later, however, a freehold land ownership requirement was added.

As the Middle Ages drew to a close during the 16th century, yeomen were more numerous, more wealthy, and more important than in any other age, before or after. A constant motif in the literature of the time was that the yeoman is the best type of Englishman, holding society together, neither clinging to the high, nor despising his poorer neighbors, hearty, hospitable, and fearless. Today the English countryside is not only full of Elizabethan mansions but also of the more modest houses of Tudor or early Stuart architecture which once were the manor houses of small gentry or the seats of prosperous freehold yeomen. It was a great age for the rural middle class.

Yeomen were one rung on the social ladder below the landowning gentry, who included most of the Lords of the Manors. The gentry, as “gentlemen,” were entitled to bear (coats of) arms and, along with most of the clergy, were addressed as “Mr.” But, the differences between the “small” gentry and the prosperous yeoman were slight, and there was considerable mobility between the two groups, downward as well as upward. As the Reverend William Harrison, writing in 1577, puts it:

For the most part, yeomen are farmers to the gentleman, but many are able and do buy the lands of unthrifty gentlemen, sending their sons to the schools and universities, and to the Inns of Court [English law school], or otherwise leaving them sufficient lands whereupon they may live without labor, [and] do make them by those means to become gentlemen.

While the prestige of being a yeoman was below that of being a “gentleman,” it was not far below, and it was still well above that of the bulk of the rural population. Thus, it is small wonder that many of our colonial ancestors, if they could legitimately make the claim, identified themselves as yeomen in their wills.