On this 20-year anniversary of the Levi Stewart Memorial Park in Kanab, Utah, the Scudder Family Historical & Biographical Journal pays tribute to the Levi Stewart branch of the Scudder family that shares the rich Scudder history of “service to others.” Most of these photos of the park were taken on the day of its dedication in 2001. The Journal also thanks Susan Sherwood Arnett and her husband Wayne Arnett for the insightful articles they contributed to the issue of the Journal about Levi Stewart and his great-grandson Stewart L. Udall. Hopefully this issue will inspire other branches of the Scudder family to share your interesting stories from some of your family journals and family histories with the Journal at scudder.org.

On June 16, 2001, dedication services were held for the new Levi Stewart Memorial Park and for the unveiling of the 9-foot bronze statue of Levi Stewart, who is fittingly memorialized in the attitude of prayer.

The project was spearheaded by the vision of Georgenia Stewart, since deceased, who was a great-great granddaughter through Levi Stewart and Artemacy Wilkerson’s son Alonzo Lafayette Stewart who survived the fire that took the lives of five of his siblings and his stepmother and aunt, Margery Wilkerson.

There were many others also involved in the project. One of the unique features of the park is the brick walkway with bricks with names of individuals and families who contributed funds to make the park and statue a reality. The Memorial Park is located on the grounds of the old Kanab Fort where a Monument to Old Fort stood with plaque honoring Levi Stewart, first Kanab bishop that had been dedicated by his descendants on Tuesday, April 11, 1950. It was dedicated by his only son then still living, Brigham Freeman Stewart.[i] 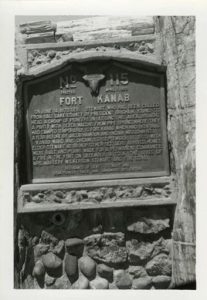 This pamphlet had been circulated, primarily among the Stewart family, to solicit the necessary contributions for the new Levi Stewart Memorial Park. 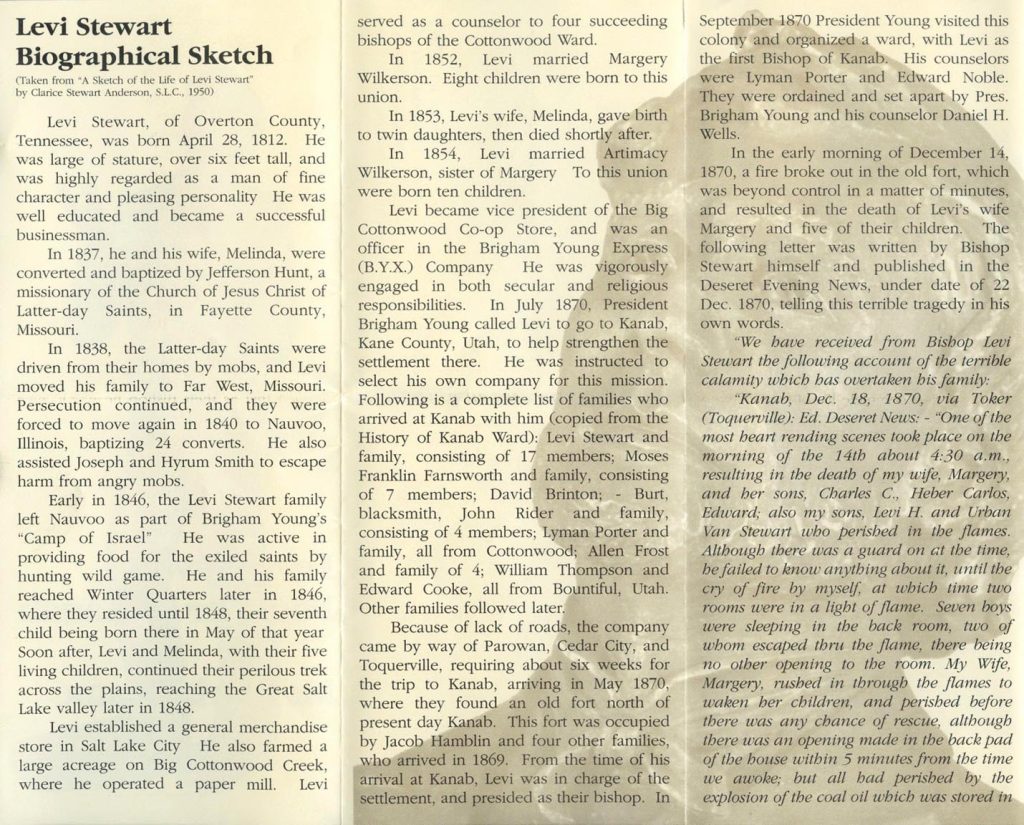 On the evening before the Memorial was dedicated, the town of Kanab and committee for the Levi Stewart Memorial Park and statue project hosted a dinner and program for the 160 descendants of Levi Stewart and other early Kanab founders who had gathered. Most Stewart descendants had traveled for the occasion as few descendants, if any, were then residents of Kanab but it was well worth the trip. In addition to the great meal and camaraderie Friday night and Saturday dedication, the locals provided a program at the dinner with music and a very well-done skit of Levi Stewart’s life. 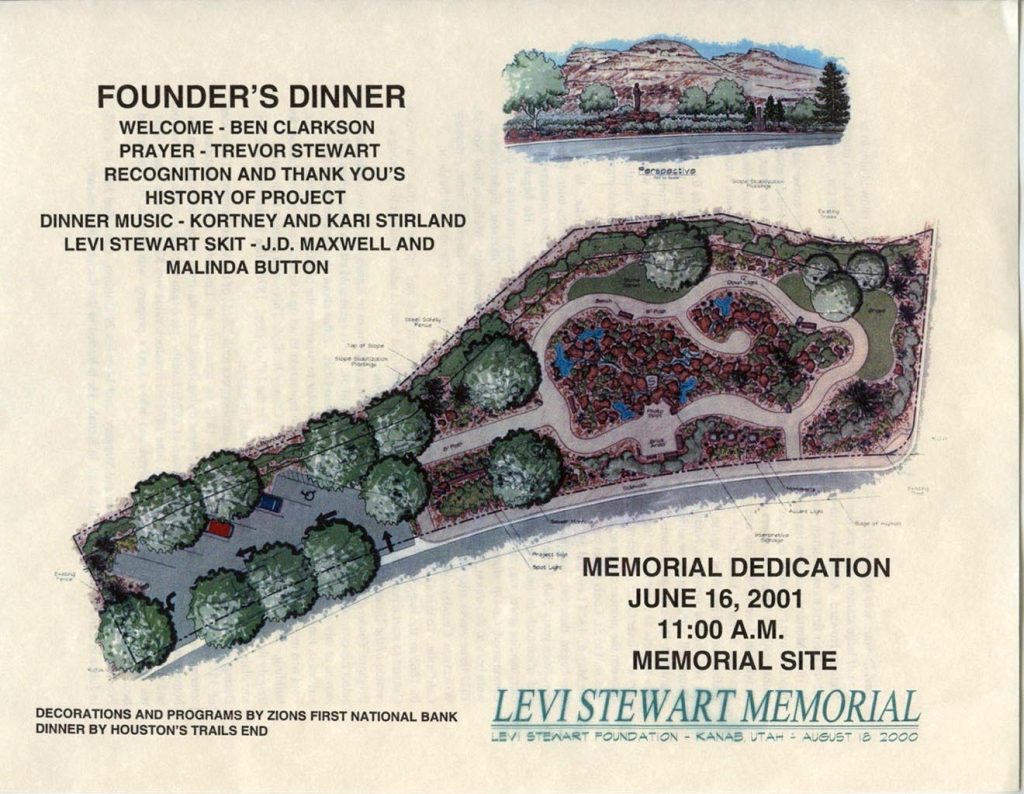 The event was a wonderful opportunity to meet new cousins, to rekindle friendships already dear and to share family history information. One very distinguished attendee who has spent a lifetime researching, preserving and promoting Stewart and Udall family history was Elma Udall, another public servant in the family whose career was with the U.S. State Department. She is since deceased. She is the sister of Secretary of the Interior Stewart L. Udall and his U.S. Representative brother Morris K. Udall. 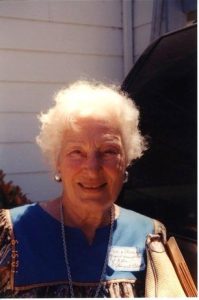 On the morning of June 16, 2001, the crowd gathered for the dedication of the park and the unveiling of the statue. The program at the park included a keynote address by Monte N. Stewart 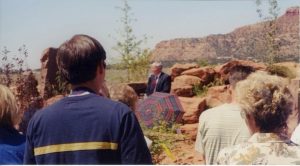 And a dedication and prayer by Kanab Stake President, Marlin Esplin. 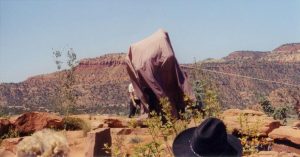 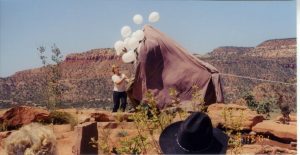 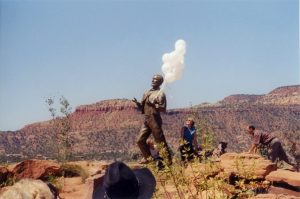 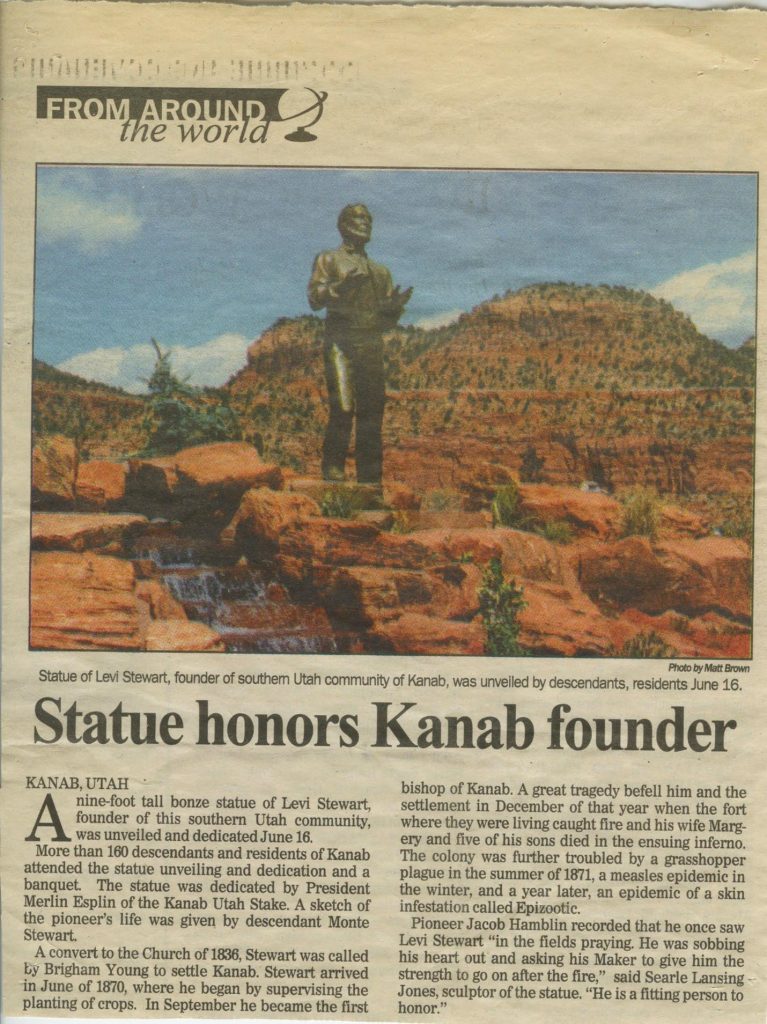 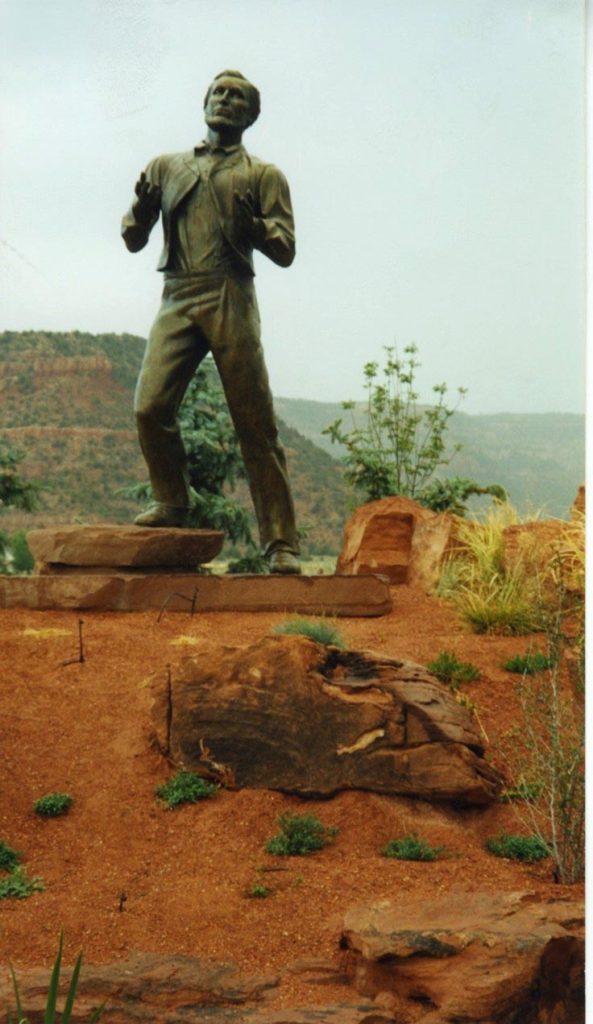 At the dinner the night before, the statue’s sculptor and a new Kanab resident, Searle Lansing Jones, reported his experience in creating the statue. After the fire that destroyed a part of the early fort and took the lives of six members of Levi Stewart’s family, many of the residents were so downhearted that they considered leaving. Mr. Jones studied the lives of several of the early founders of Kanab but Levi’s story and an incident reported by Jacob Hamlin commanded his attention. Hamlin was the father of Levi’s daughter-in-law Rachel (Hamlin) Stewart. Jones noted that after the fire had made some desire to leave Kanab, Levi, he who had lost the most, told them that he understood their feelings and if they felt they must go away, they were free to do so. Levi said, however, that felt he had been called by the Lord to establish the town of Kanab and to be its first bishop. He was going to stay and press forward in faith, depending upon God. Levi’s steadfastness and determination inspired the rest and the downhearted decided to remain. Levi kept up a brave front. Only Hamlin witnessed Levi pouring out his grief to God in prayer, seeking solace, when Hamlin happened upon Levi alone in a canyon pouring out his soul to God in grief. Lansing said, “I can relate to Levi Stewart because I too lost a daughter in a fire.” Levi’s 9-ft. bronze statue has thus memorialized Levi Stewart in prayer, pleading for the strength to continue in spite of his difficulties. 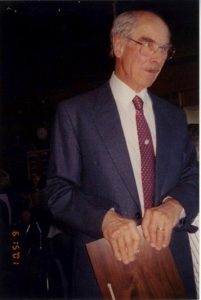 The other founding settlers are also honored at the Memorial Park by plaques and the brick walkway with the names of many of their descendants. The Udalls are among those honored on these plaques. 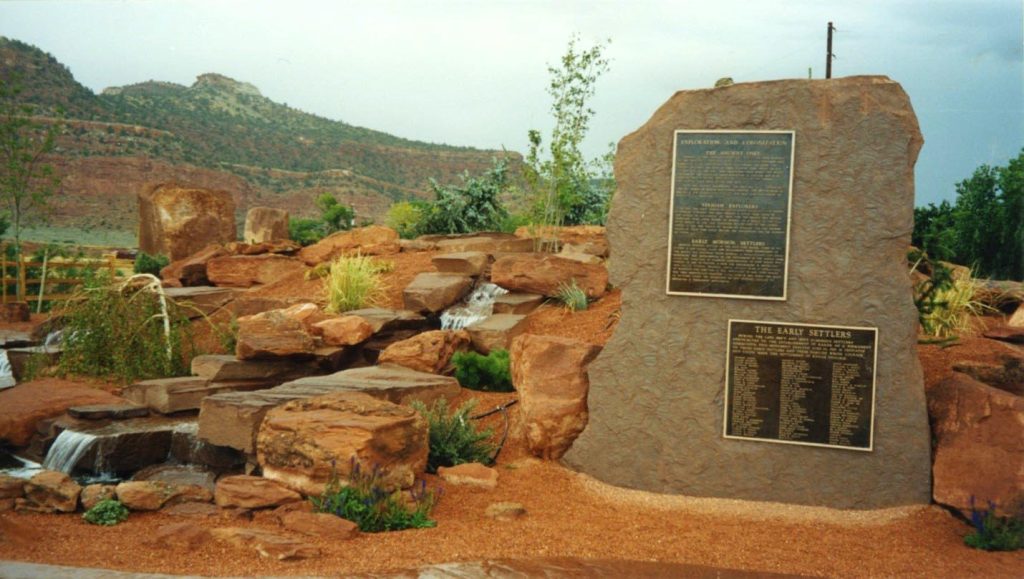 Views from the Levi Stewart Memorial Park are stunning. 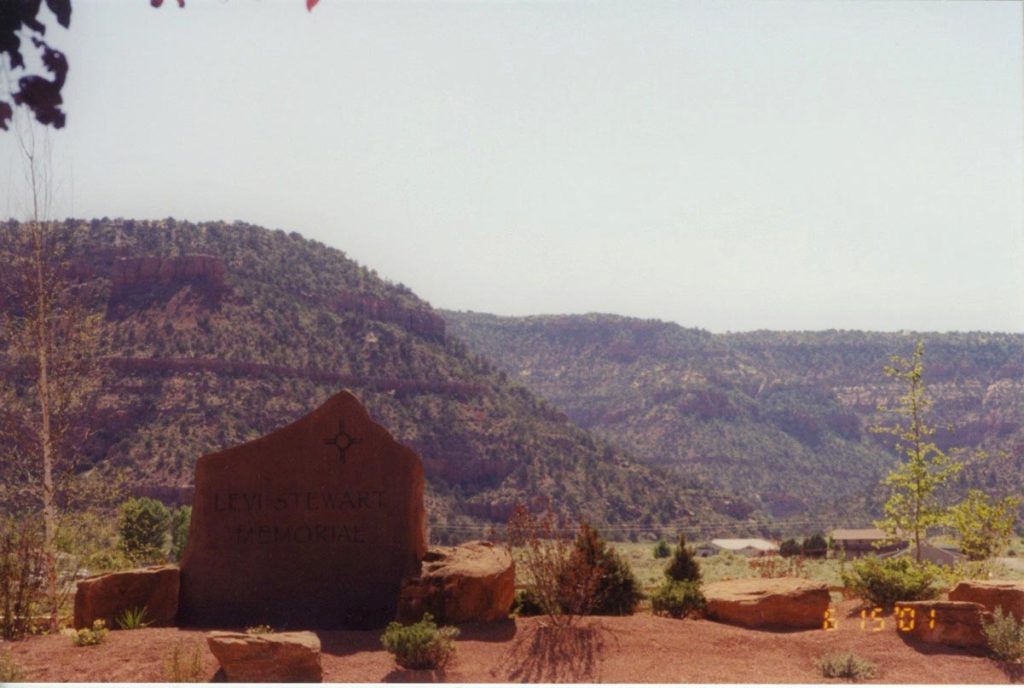 Since the dedication of the Levi Stewart Memorial Park twenty years ago, another generation or two have grown up to make their pilgrimages to Kanab to honor their ancestors and to remember their history.

Other “monuments” to the life of Levi Stewart and his activities remain in Kanab or its environs and are shared here for those of Levi’s descendants who want to add them to their own family histories such as these photographs of the home Levi Stewart built.

Levi Stewart Backyard. Telegraph pole is not the original 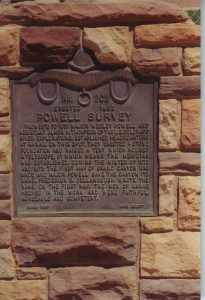 The original Stewart family burial plot was in the old Pioneer Cemetery in the center of town. 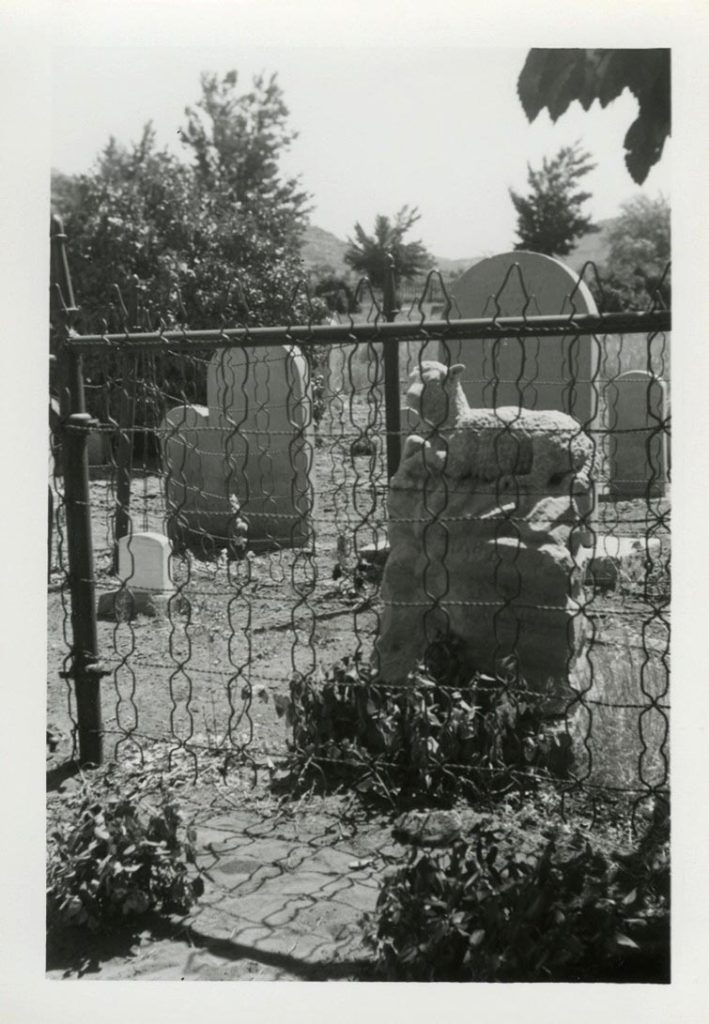 As with the other early pioneer residents’ families, the original family burial plot in the Pioneer Cemetery in the middle of town was carefully moved when the town created a new cemetery on the south side by the road to the Arizona border. 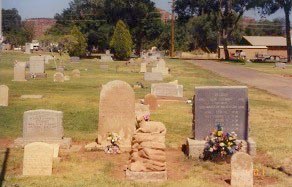 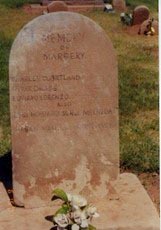 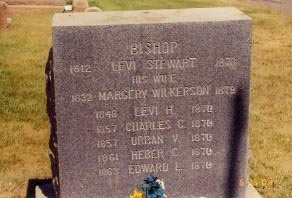 And the greatest monument of all to Levi Stewart is his huge posterity that has honored his legacy by their faith, by their good works, by their loyalty to family and by their service to others.

[i] Adonis Findlay Robinson, comp. and ed., History of Kane County, (Salt Lake City, Ut.: for the Daughters of the Utah Pioneers, Kane County Commissioners and Mayors and Councilmen of each community, 1970), 23–24. 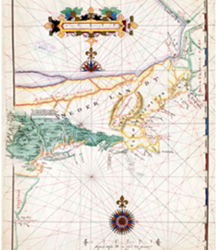 To continue the story of John and Mary (King) Scudder of Newtown, Long Island from our Spring 2021 journal issue,[2] articles in this Summer/Fall 2021 issue will share more about this couple’s pioneering activities and about some of their remarkable pioneering posterity who are not generally recognized as Scudders, due to their descent through a female line.

END_OF_DOCUMENT_TOKEN_TO_BE_REPLACED 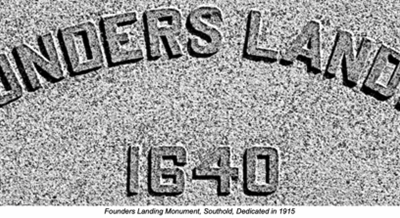 It was a time of religious and political turmoil when John Scudder grew up in western Kent, England, between the power centers of British political and ecclesiastical might, at London and Canterbury. John Scudder was the nephew of one of the most widely known Christian authors and reform-minded ministers in England, Rev. Henry Scudder.

END_OF_DOCUMENT_TOKEN_TO_BE_REPLACED 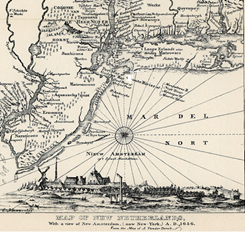 In the sense of being “the first to do a particular thing.” Elizabeth Scudder, the daughter of John Scudder and Mary (King) Scudder, was a “pioneer” among American Scudders when she was the first to marry into a Dutch New Netherland family. Her husband was John2 Alburtus whose parents were Pietro1 Alberti and Judith Jans Manje, documented in New Netherland by 1635 and 1642 respectively

END_OF_DOCUMENT_TOKEN_TO_BE_REPLACED 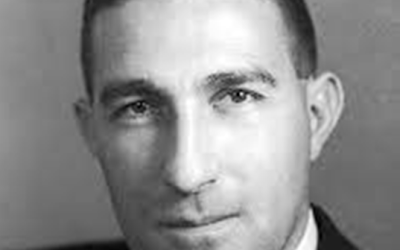 If our cousin, Stewart Lee Udall could see the environmental degradation happening to our planet today, he would roll over in his grave. But he would not be surprised. He saw it coming. He predicted it. He warned that if we didn’t take action, this would happen!  But Stewart took action. He spent a lifetime of vigorous action and bold leadership in defense of the Earth and humanity’s future.

END_OF_DOCUMENT_TOKEN_TO_BE_REPLACED 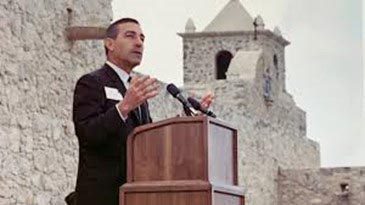 In 1969, Stewart Udall departed his post as Secretary of the Department of the Interior, when President Johnson left office, but continued to be a tireless advocate of civil rights, social change and environmental stewardship.

END_OF_DOCUMENT_TOKEN_TO_BE_REPLACED 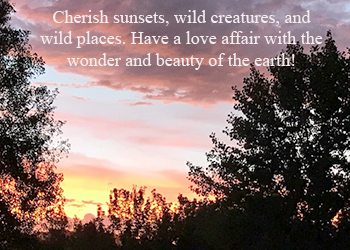 Udall: A Letter to My Grandchildren

This is the most important letter I will ever write. It concerns your future—and the tomorrows of the innumerable human beings who share this vulnerable, fragile planet with you.
It involves changes that must be made if environmental disasters are to be avoided. The response to this challenge will shape the future of the entire human race.