Will of William Scudder[1]

“My bodie to be buried solemely according to the custom of the church of England, within the parish churchyard of Darenthe, as near as may be unto my father’s grave. 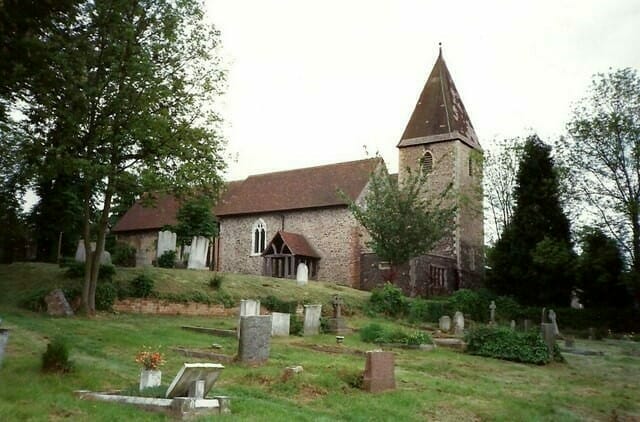 “To wife Margery all my lands and tenements whatsoever and wherever, during only her natural life.

“After that to Parnell Scooder, my eldest daughter, my lands in Dartford and Wilmington now in the tenure &c of James Pinden, with remainder to Mary Scudder, my youngest daughter. To my next two daughters, Margaret and Joane Scudder, my messuage of tenement called Frog Lane (with mault houses etc belonging) now in the tenure of John Ellis etc in Sutton-at-Hone.

“To daughter Mary a parcel of land called Pricles Meade (six acres or more) at Sutton-at-Hone, with remainder to Parnell, my eldest daughter. And if they two both happen to die without issue etc then to my other two daughters.

“The rest to Margerie my wife, whom I ordain full and sole executrix &c, desiring and entreating my trusty and well beloved cousins and neighbors Robert Walter, John Humfrey and Thomas Scudder to be overseers and assisters etc, and, for their care & c, I give them twenty shillings apiece. Prerogative Court of Canterbury, Hudleston, 85.”

Will of Margerie Scudder, Widow of William Scudder of Darenth,

“My bodie to be buried in the Square Churchyard of the said Newington at the discretion of my executrix.

“To the seaven children of Mary Freeman my executrix xiis a piece.

“To William Chapman my grandsonne, one chest.

“To Mary Stacey my granddaughter, one Trunk which is Thomas Stacey her father’s hands. To Thomas Stacey my son in Law the some of fiftie pounds in money which he now is indebted unto me. Also one featherbed, one bowlster, [indistinct] and one white blanket, and two great newe brass kettles in the hands of the said Thomas Stacey my sonne in Lawe.

“Whatever I have not formerlie herein bequeathed I give unto my daughter Mary Freeman whom I hereby ordaine my sole executrix of my last will and testament. I hereby appoint for overseers Roger Quatormaine and William (indistinct) my loving Frendes, and doe give them for theire paines xijs a peece. Sealed and delivered in the Prerogative Court of Canterbury, Slynen 26.”

Confirmed by Their Primary Source Records

By summer of 1992, there was clear evidence that William Scudder, yeoman of Darenth, w. d. 27 July 1607, was the brother of HenryA Scudder, yeoman of Horton Kirby, w. d. 25 September 1594. To arrive at this conclusion, all one has to do is to compare cited relationships and properties in the wills of HenryA Scudder and WilliamA Scudder and with the will of HenryA’s son, Rev. Henry1 Scudder of Collingbourne Ducis, Wiltshire, w. d. 20 February 1651.[4] For the benefit of our readers, these wills are reprinted in the Scudder Association Foundation’s Scudder Biographical and Genealogical Journal, volume 1, nos. 1 and 2 (April and May/June 2019) which were first printed in the Scudder Searches. The wills of William Scudder of Darenth and his widow Margery supply the names of their four daughters.

Two of these daughters and the widow Margery have been victims of “jumping to conclusion type genealogy” and sent off to America in error, so we now publish the proof of their remaining in England. This includes marriage data in England for 3 of William and Margery’s daughters to compare with the names mentioned in Margery’s will registered in 1626. The only daughter then alive was the youngest, Mary (Scudder) Freeman, who was named executrix of Margery’s will. Unfortunately, Margery only refers to Mary’s “seven children” without given names. Margery does mentions two other grandchildren by name: Mary Stacey, the daughter of William and Margery’s daughter Margaret, and her grandson William Chapman, son of their daughter Joane who died in 1615. Parnell is not mentioned in her mother’s will and no issue is either and no further record for Parnell was found after her father’s will.

Without christening records for WilliamA Scudder’s family, ages are estimated by birth order stated by him in his will and that none were of age. Also found to assist in estimating, were the marriage records for Margaret and Joane, Joane’s death record and the christening of her known son William mentioned in his grandmother’s will.

Wife Margery and 4 underage daughters were named in William’s will. No sons.

Dau. Margaret’s daughter Mary Stacey, named in grandmother Margery’s probate in 1626. Thomas Stacey was referred to as her son-in-law and in possession of a trunk willed to granddaughter Mary Stacey. Margaret was named in her father WilliamA Scudder’s will as his 2nd daughter. Margaret was deceased before her mother’s will was registered in 1626. There was one possible other child of record that may belong to furnish other clues, if Thomas Stacy was at the time in possession of property of his wife at Sutton at Hone, Kent and not by then remarried. A Margaret Stacy, daughter of a Thomas Stacy was christened on 26 September 1624 at Sutton-at-Hone.[8] Because Margery did not mention this grandchild in her will, she is noted here but without proof. Was she the correct Thomas Stacey’s child? Was she still alive in 1626, or is it possible that she was not Margaret’s child but the child of another wife? Further research may tell more.

Her son William Chapman was named in his grandmother Margery’s will registered in 1626. William was christened at Dartford on 16 July 1611. Joane (Scudder) Chapman died 27 December 1615.[10] Joane was named in her father’s will as his 3rd daughter.

iv  Mary Scudder, b. abt. 1595 was named by WilliamA as his youngest daughter; md. Mr. Freeman and had 7 children unnamed by 1626 as mentioned in Margery’s probate file. Mary was named as Margery’s sole executrix. Marriage record and christening records for children are not yet found.

No widow or daughters of William Scudder of Darenth, Kent went to America.

[1] Abstract, published by H F Waters in Genealogical Gleanings in England, (Boston, 1901), 769.  Use caution with Waters on page 768. Waters’s comment regarding the will of John Lowers, which is printed on page 768, is incorrect and is the source of much error for many decades that gave Thomas1 Scudder (T) the wrong wife. John Lowers’s will refers to a different Scudder family that was from North Cray, Kent and not to the family of Thomas (T), the immigrant. His Scudder nieces and nephews and his sister Elizabeth Scudder match exactly the children and wife mentioned in the will of Henry Scudder of North Cray, w. d. 1641.  This Henry of North Cray mentions his wife Elizabeth Scudder, his brother[-in-law] John Lowers and his Scudder children as mentioned in the will of John Lowers. An abstract of the will of Henry Scudder of North Cray, 1641, will be published in our next issue, (August 2019). His precise relationship to the family of Horton Kirby, Kent, England is not yet known.
[2] “St. Margaret of Antioch Church, Darenth,” by Roger Smith, public domain, cc-by-sa/2.0 – © Roger Smith – geograph.org.uk/p/2207112.
[3] Extracted from William Faden “South London Map 1800,”. Original map is in the public domain.
[4] Scudder Searches, volume IV, no. 3, (Summer 1992): 4–5.
[5] See will transcript above.
[6] See probate abstract above.
[7] Findmypast Collection, “England, Phillimore Marriage Registers, 1531–1913,” volume Kent Marriage Registers, Vol 1, Westerham, Kent, page 77, image number 77, image count 152, https://search.findmypast.com/record?id=GBOR/PHILLIMOREMARS/YPKEN01/0085&parentid=GBOR/PHILLIMOREMARS/YPKEN01/0085.
[8] “England Births and Christenings, 1538-1975,” database, FamilySearch, https://familysearch.org/ark:/61903/1:1:J9W3-Q9M.
[9] Jone Scudder to Willm Chapman, “England Marriages, 1538–1973,” database, FamilySearch, https://familysearch.org/ark:/61903/1:1:NVLH-GP1.
[10] Death record for Jone Chapman, Findmypast, https://www.findmypast.com/transcript?id=R_275466358.