“Standing on the Shoulders of Giants”

Our intrepid India Grants Chair, Dr. James Taylor, was busy on his recent visit to India.  He just forwarded us this report, supplemented with photos from our friends at CMC Vellore Foundation. Thank you to all who helped.

There was great excitement at Christian Medical College as construction has now begun at the new Kannigapuram Campus.  Those who have visited the Vellore campus know the downtown location is landlocked and terribly over crowded even by Indian standards. It simply cannot meet the continuing (nearly 10% per year) growth requirements of the CMC. 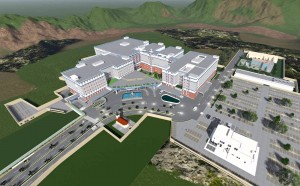 Computer model of the Kannigapuram Campus

The new facility, about 20 minutes east of Vellore on the Mumbai Highway, is the realization of over 10 years of work.  Construction had been delayed for several years by government bureaucracy and the endemic corruption with which CMC refuses to cooperate.  After a near miraculous government approval, construction has now begun. 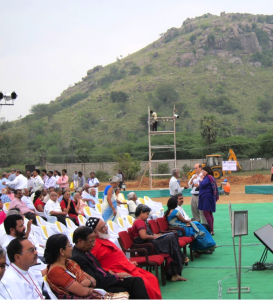 The gathered luminaries include Bishop Rajavelu of the Vellore Diocese, closest to camera. The gentleman in the red robe is a Bishop of the Syrian Orthodox Church in India, an example of the ecumenical governance of CMC. The mountain in the background gives a feel for the spacious quality of the site.

On Friday January 20th, Council members joined a crowd of about 800 employees, staff, students and faculty in an open-air brick laying ceremony at the construction site.  The event occurred at dusk, with over cast skies. 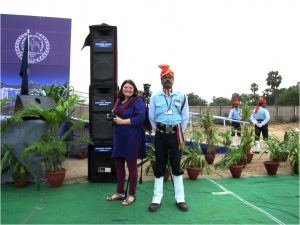 Kate Gunther, with security personnel, is guarding the stage.

The atmosphere was calm, but thick with a rain, which threatened, but never came. We built a ceremonial wall to be featured in the new hospital. Governmental officials, luminaries, longstanding employees and prominent retirees each contributed a brick. 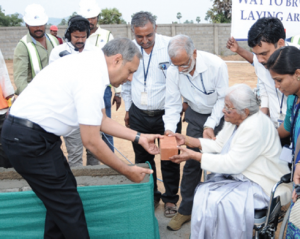 A retired nursing supervisor and colleague of Ida S, Anna Jacob, age 103, laid down the first brick.  She handled it with aplomb. 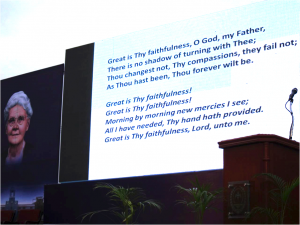 Aunt Ida is looking down on the ceremonies as we sing her favorite hymn, “Great is Thy Faithfulness”.

An image of Ida herself looked down as a guiding spirit, from a projection screen behind the dais.  She was very much a part of the ceremony as the recipient of many tributes and references.

We sang Ida’s favorite hymn, “Great is thy Faithfulness”.  We recited her favorite prayer.  The Scudder family remains a vital part of the emotional and philosophic fabric of CMC.

Dr. Sunil Chandy, reminded us in his dedication address that, “We are here today, standing on the shoulders of Giants.”  As a Scudder, I was proud, yet humbled, to hear the sincerity in his voice. 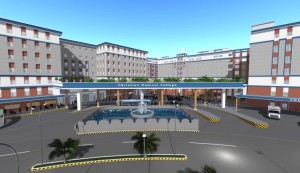 The new campus is in an ideal location half way between Chennai and Bangalore.

Kannigapuram campus will house an outpatient department and a super specialty in-patient hospital of 1500 beds for neurosurgery, thoracic surgery and oncology.  This campus will also feature the first dedicated trauma unit in India.  Trauma care has risen in priority, as highway trauma has become a significant public health issue.  I can attest to the lawless and insane India roads where giant trucks, buses and motor scooters jockey for position with bullock carts, bicycles and street venders.   The new campus is in an ideal location for a trauma service, on the major highway half way between Chennai and Bangalore.   The new property occupies about 50 acres, the rarest of commodities in India, space.